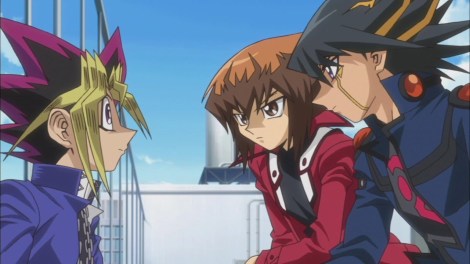 This is a movie that was 10 years in the making and brought nostalgia for those that watched the original Yu-Gi-Oh, Yu-Gi-Oh GX, and Yu-Gi-Oh 5D’s. It also was to celebrate the 10 year anniversary of the franchise. This was definitely fan service to bring the main three protagonists from each of the series into one setting to create a mega force of a team.

A time traveler named Paradox goes through each of the timelines of our heroes to acquire powerful cards and to alter the course of history. First, he targets Yusei Fudo’s timeline in the 5D’s series and steals Stardust Dragon, then he goes to the GX timeline to take Jaden Yuki’s friends’ cards and does battle with Jaden. Finally, he goes back to the original series to eliminate Pegasus J. Crawford to change history as a whole and kills everyone except Yugi Mutou.

Together, they have to work together in a form of a duel to beat Paradox, but it’s easier said than done as Stardust Dragon is his hands and has acquired some of the best cards in the history of Duel Monsters through the time travel.

It’s amazing to put the central main protagonists from the three series into one movie. Each of them felt like equals with none of them feeling more important than the other. Each of them held their own in the duel and were able to have their ace cards. To see Jaden, Yugi, and Yusei in a team was amazing.

It’s hard to tell a story in a course of a movie when it doesn’t even clock in at an hour fitting these three heroes. It feels simple which is fine since most of the target audience are kids and young adults.

If we’re talking about nostalgia, many characters were missing especially from the Yu-Gi-Oh and GX series. Many longtime favorites were not seen.

I really hope that for the 20th anniversary, they’re able to have all of the main protagonists up to date. I’d also like to see them battle each other with some of these cards they’re unfamiliar with and game mechanics. Maybe include other cool battles we’d like to see like Seto Kaiba versus Jack Atlus.