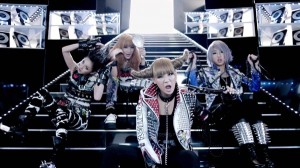 This release from CL, Bom, Dara, & Minzy comprising the collective known as 2NE1 brought together various different styles from rock, R&B, ballads, electronic, hip-hop, and of course, pop.  Each song was marketable as its own single which made this EP very unique and was released over time to give each song the spotlight as opposed to releasing the EP in its entirety which worked because every song became a hit.

There really was a song for everyone from the rock inspired “Ugly” to the heavy bass hitting “I Am the Best”.  Of course there is that controversy of every musical act in the world resorting to technology with the autotune, but somehow 2NE1 is one of the very rare acts that can absolutely make it work.  Every song on this EP also happened to be listenable as even though it’s an EP, every track brought quality.

What also makes this EP is that it fits the mold of what 2NE1 really is.  They are a group with a lot of edginess. If there was a group in the K-Pop world that can define what swag is, 2NE1 hands down would be it.  That’s what makes them different from all the other groups in Korea and what makes them unique.

Of course, if you release some of your best work, it would have been much better to do it in the form of a full length album.  An EP is fine and all, but if it was extremely as good as this one, it just leaves fans wanting more and raises the bar that much higher.  Other than that, I don’t have any bad things to say.

I had gotten this mini album because I had heard “I Am The Best” and got pumped up after hearing it. As I kept listening to the other songs, I became instantly hooked and became an instant Blackjack. This is one of albums out there where quality definitely reigns over quantity.

“I Am the Best” also was the only KPop song included in the American version of the dancing game, “Dance Central 3”.

Music video for “I Am The Best”