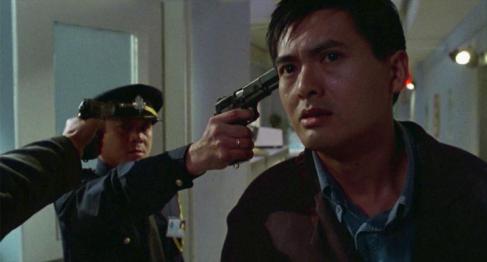 I decided to watch this movie because there’s one thing I like in my movies, and that’s crazy action scenes. I know that John Woo movies usually produce that especially with Chow Yun Fat in the lead role.

After losing his partner in a teahouse shootout, Inspector “Tequila” Yeun must team up with an undercover cop to take down a gang of mobsters who are running a weapons trade.

If there’s a scene that’s worth the price of admission, it’s the hospital scene towards the end with all the crazy shootouts. It’s a scene that American and European action film makers have to take note with all that violence. This movie sells itself with the massive gun violence. If you want to see a bad ass killing spree, the beginning and end scenes are the ones to watch.

Even though this movie was filled with the more than adequate action sequences, the story itself was a bit bland as I felt it has been done so many times. Story wise, the other John Woo/Chow Yun Fat movies were stronger in terms of the actual story.

I think this movie held the record for the most overall kills in a movie for the longest time until “Rambo” broke it. This movie really does personify badass and Chow Yun Fat didn’t have to play a criminal. The cops were the cool guys finally. I think it’s the greatest violent movie of all time.