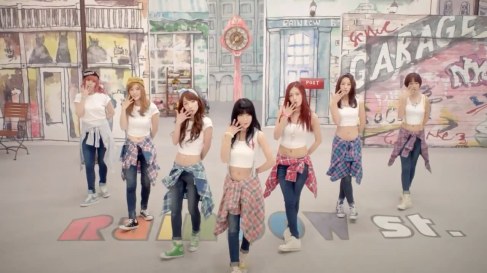 After nearly two years being away from the Korea scene, Rainbow made their comeback on their domestic soil. I knew I had to get their album because I considered myself a “Raineous” as they are one of my favorite groups.

I thought this new concept was cute, fresh, bright, and colorful. I felt their new sound was refreshing and showed that they could have fun. Their songs just filled my ears with bubbly feelings and happiness. The songs were full of fun and joy. If I could dance, I would have probably danced to a lot of these songs considering they had an electropop feel to the songs. Their ballads were good too.

Knowing that this was just a part one out of a two part series, I would have liked both parts to have been condensed into one full album considering both parts had the same sound. If parts one and two were different concepts than it would have made a lot of sense.

It was well worth the wait as I had become a fan of theirs during periods of inactivity. I literally tuned into the music shows to see them perform every week. I totally enjoyed their new concept as it was different than their “So Girls” promotions.