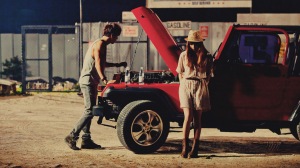 So, I had previously checked out Juniel’s album and got hooked.  I wanted to check out more of her music without having to spend the dreaded dollar for a complete full length album.  Good thing there were only mini albums to check out.  I didn’t preview any songs and hoped for the best when making the investment.  I just hoped that the songs were as good as some of the other ones I had. I’m pretty much am going back in time.

This album was also easy on the ears.  This album was laced with more ballads which is a nice change of pace from all the uptempo songs I’ve been accustomed to in the world of KPop.  Sometimes I like to take it easy.  I really liked the fact that she plays the guitar when performing unlike other artists in KPop where they rely on flashy costumes and crazy choreography to cover up for their lack of music abilities not that there’s anything wrong with synchronized dancing and singing.  It also helps that she did a duet with Yong Hwa from CNBlue which is always a bonus as he’s also a great writer.

I feel that as a singer songwriter that was just debuting in her native homeland of Korea, she had yet to blossom and mature in her field.  I think as time passed, her abilities evolved, but at this point, not yet.

I liked the album. If you give it a try, you’ll like it too.  Juniel’s voice is extremely pleasant.  Do yourself a service and invest a few bucks to give it a listen.