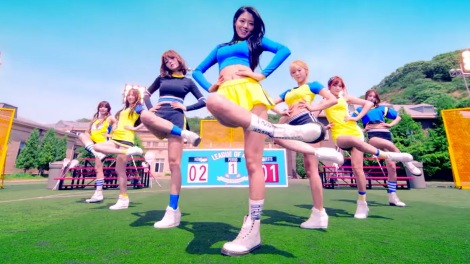 Intro
Back in 2014, I gave these girls a chance when I listened to some of their music. I only knew them as a group that was a band and all of a sudden weren’t one. It wasn’t until KCON 2015 that I rediscovered them and saw that they had made improvements to their music, stage production, and overall image. I previously saw them as a group that didn’t stand out to me individually, but after seeing them perform live, I asked questions here and there about specific members. It helped that one of the members (Jimin) waved at me before their performance.

Good
The titled track started the album off with a banger. It was the song that caught my ear. Yes, I mostly listen to the music before watching their music videos. “Heart Attack” was a song that had a lot of bass.

The song that really caught my ear was the song afterwards. “Luv Me” easily is my favorite song off this EP. I love it so much where it’s now currently in my rotation of songs I often listen to while driving. “One Thing” is also one of the stand out tracks I think people should pay attention to as it definitely is a gem.

Bad
“Really Really” was a more downtempo song, and it also didn’t stand out to me. “Chocolate” felt like a try hard R&B song which I don’t think fits them as a group at the moment. “Come to Me” was just an alright song where I’d listen to it if I can’t change the song on time. I won’t ever intend on selecting that song on any playlist, but it’s not bad enough where I have to change it immediately. If it’s on then it’ll stay on.

Overview
It really is a decent album from AOA. It was really worth the $4.99 off iTunes, so I really did get my bang for my buck. I got some good music from one of the fastest rising groups in terms of popularity.