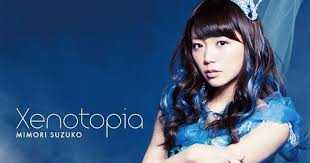 Intro
In my opinion, outside of the actual anime of Love Live, the seiyuu with the best music is hands down Suzuko Mimori. I already love her voice as Umi Sonoda especially when she does a solo song. As a solo singer, I love her music and usually try to support her by purchasing her music whenever the opportunity presents itself.

Good
I don’t know this anime she did this soundtrack for, but because I’m a fan of her music, I’m more likely to check it out than if I wasn’t a fan. Although the title track is strong, my favorite song is the other song, “Wonder Flight”. Both are great songs to enjoy.

Bad
Obviously, this is a single album, so there aren’t many tracks to judge, but I do feel like her previous efforts were more superior to this one. That’s not a knock on her because she has released enough material that’s great enough where this one can be considered not up to par. This album is a great nonetheless.

Overview
What she has over the other seiyuus is consistency. She has music constantly coming out whether it’s a single album, an EP or an LP. She puts out music often and this release definitely is solid. I’m looking forward to hearing whatever she has cooking up next or hope she voices another anime so that she can do the soundtrack.