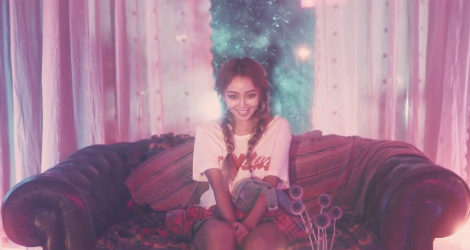 This EP marks the front lady of Sistar’s first mini album and second project overall. As the lead singer of Sistar, she gets opportunities within the group to showcase her singing abilities, but in this case, she gets to do it as a soloist. Let’s see why she’s known as one of the best singers in all of KPop music.

Once again, due to her being a soloist, she gets more opportunities to work with Korean hip-hop artists reuniting with Dok2 and also getting to collaborate with Jay Park. That also implies that she’s leaning heavily towards a hip-hop and R&B sound which suits her. It’s almost as if she changes up her sound when she breaks off from Sistar. She actually does well with collaborations to switch up the sound. Her best songs happen to have guest appearances.

The reason why her best songs happen to have guest appearances is because the guests often outshine her. Dok2, Jay Park, and Jooheon from Monsta X all are the highlights of the songs they appear in. Jay Park is the best part with his smoothness in the song “One Step” where she struggles to be the main star in her own song.

I think it’s a solid second effort, but it slightly falls second fiddle to her debut album. It’s still a very good album, but she has a bit of a way to go as she still relies on hip-hop artists. It does feel like a sequel to “Love & Hate” as opposed to this EP being its own project as it continues the same vibe and sound. For her next project, I feel she has the capabilities to evolve as an artist.