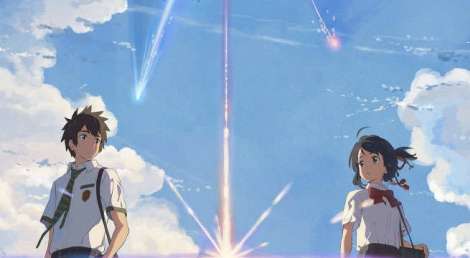 I missed out on the chance to see this movie at Anime Expo back in 2016 as it was really hyped up to be something special. At the time, I didn’t think much of it as I already had a lot of anime on my plate. Even upon release in the U.S., a lot of people still were continuously hyping it up. One day, I wanted to know what was so great about this movie, so I went to a local movie theater that was playing it to see what it was all about.

One day Taki notices that he had not switched with Mitsuha for some time. He also isn’t getting any messages from her, so he goes to investigate and finds out that he ended up in another timeline. Things weren’t as they seemed and he has to try to help both timelines from destruction.

Despite not having a previous history with this movie nor any of the characters, I grew to like the main two characters. By the end of the movie, you really wanted these two to succeed and end up with each other. The feels were definitely real as you really invest your emotions into both Taki and Mitsuha along with many other characters.

As a simple minded person, the movie can get a bit confusing if you don’t constantly pay attention. Even after the movie, I had to look up the movie plot lines to find out what exactly happened. I feel that I would personally get it more if I watched it again.

I will definitely admit that I did not have a dry eye by the end of the movie. I would say that there were feels from my end. When a movie can provoke a specific kind of emotion especially when you have an specific investment into it, you know it did its job. I didn’t see anyone leave the theater that didn’t like it. I’d say it’s the best anime movie that didn’t already was part of an anime franchise. I didn’t think I would like this movie, but by the end of it, I was right. I absolutely loved it.