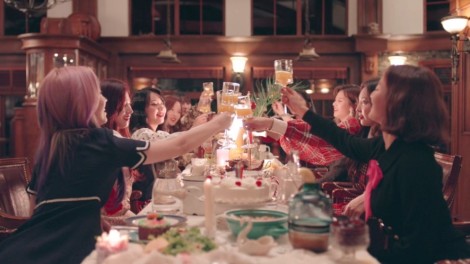 I thought with the release of “Yes or Yes”, they were done with a very busy 2018. I was more wrong than ever. They squeaked out one more hit single in December to cap off the year with “The Best Thing I Ever Did” off the EP, “The Year of ‘Yes’” which is a reissue of the “Yes or Yes”. Can lightning strike once again?

I won’t go too much into the songs that were included in “Yes or Yes”, but will go into the two additional songs because it has already been covered here. This album does include all of the “Yes or Yes” songs, but it comes with two extra songs. The first one is “The Best Thing I Ever Did” which is their lead single and the Korean version of their Japanese release, “Be as One”. Both songs are a swift change of all the fun Twice songs that we have grown to love, but it’s a welcomed change because we get to hear a different side of the nine girls.  It shows that they can have a successful song without fun and playful choreography.

I liked “The Best Thing I Ever Did”, but it didn’t blow me away like “Yes or Yes” or any of their other singles released in 2018 did. I do like this different approach as it was getting near Christmas which helped the vibe a bit. I guess I was way too accustomed to hearing a specific side of Twice when it comes to singles.

With the inclusion of “Be as One”, it now marks two Twice songs that crossed over from Japan to Korea along with “BDZ”. Twice fans from Korea should get some of the Japanese exclusive songs too just like how the Japanese Once also deserve the wonderful Korean hits.

It’s definitely a must get if you already don’t have the “Yes or Yes” EP. I feel like these songs are add on bonuses. It’s a great gift to yourself or to another person. It may actually be “the best thing YOU ever did”.