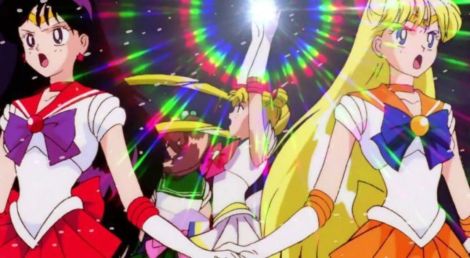 It has been awhile since I watched anything Sailor Moon ranging from the anime to any of the movies. I opted to watch this movie since I wanted to watch one with the classic looks along with everything that we all know and love from this franchise.

A new villain named Princess Snow Kaguya is on a collision course to arrive on Earth to take it to the Ice Ages and is after a particular fragment of her comet is located somewhere on the planet. It has the powers to enhance her abilities and drain the lives of others.

Kakeru is a brilliant scientist who has saved the life of Luna. He also has the fragment which Kaguya is looking for. Luna also realizes that maybe being a human has some fantastic benefits when she starts to get these emotions she never had before.

The Sailor Senshi must find a way to get the fragment out of the hands of Kaguya and also defeat her and her Snow Dancers or else the world would be covered in snow and ice.

Despite the movie being roughly an hour, they managed to tell the story. Despite not having many episodes to tell a story or even extra minutes, they did a wonderful job. It was simple yet effective.

This also possibly marks the most effective Tuxedo Mask has ever been in combat as he actually took out some of the bad guys.

The negative part is obviously the story wasn’t canon. It would have been awesome to also see Sailor Saturn if we’re going to talk about a story that isn’t linear. The fan service would have been amazing.

I also didn’t care too much about the villain as there wasn’t much character development. I wasn’t given any reason to care about the villain. I didn’t even hate the character. Kaguya was just a plain vanilla bad guy of the week type of villain.

I enjoyed it but for bias reasons. I think it’s a fun movie to watch, and it doesn’t drag out as long. I loved the movie because it had most of the core protagonists and many of the symptoms that made the original Sailor Moon series a success. The nostalgia was so fun, and it was a trip down memory lane from the transformations to combat sequences to anything else. It was a real treat to go back to the good old days of this franchise.