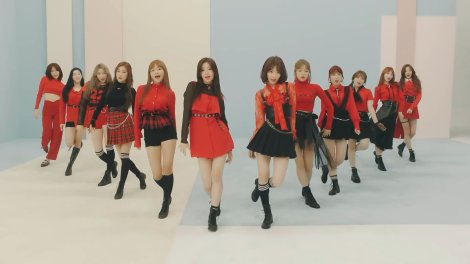 This marks the official debut of the survivors of Produce 48 which is a collaboration between South Korea’s Produce 101 which is a show on MNet that has members of various other groups competing for a spot to be in a mega group and Japan’s Yasushi Akimoto whom is the founder of the successful “48” groups like AKB48 and SKE48. Together, they will form a mega group that would promote in both Korea and Japan with members coming from both sides voted by fans.

The songs are already good. They have some of their newest songs along with the Korean versions of existing Japanese songs which I assume they’ll also have Japanese versions of their Korean songs. They definitely will cater to both crowds.

The songs are definitely on the cutesy side. It’s not overbearing at all and is expected of the members of this group considering we kind of had a good idea what this group would be all about during the duration of Produce 48. It does work for them so far as it feels fresh. I’d say the most underrated song would be “Colors”.

I felt that they could have used some time to perfect the album instead of rushing it immediately after the competition ended. Maybe more songs would have been released. Maybe some improvements could have been made.

I think it’s a brilliant concept as it brought together fans of KPop and JPop together. Usually, JPop artists don’t promote in Korea and KPop artists often branch off to Japan to expand their fan base but adopt a more JPop style to their music. For once, a group featuring both Japanese and Korean members from other existing groups are coming together to dominate not just Japan and Korea, but they may potentially take over the world.