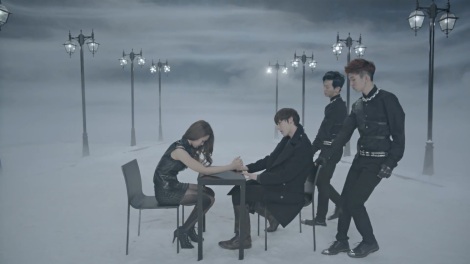 I was introduced to this group back at KCON 2012. At first, it was during the wave of the new generation of KPop acts, so there were a lot of groups that debuted roughly at the same time. Of course, I overlooked this group even during the concert because they didn’t have a song out that I really enjoyed especially since they just debuted. There were a lot of acts out that were fighting for theirs at that time.

It wasn’t until the release of this single and album that I started to pay attention a year later when I was listening to everyone and anyone.

The song that really got me hooked and sold on this group was the titled song, “Hello”. The rest of the EP is actually really good. “Hello” was one of my favorite songs of the genre in 2013 and such an underrated single.

The rest of the album is really good from top to bottom. “Hello Hello” could have easily been a hit as it has all the ingredients in single with bass drops, electronic, and many other things needed to have a smash hit. “The Girl Next Door” has a flower boy feel in terms of a song. It really is a change of pace. “A Little Bit More…” is one of the better ballads I’ve heard in all of KPop. “Beautiful Solo” is a song that ends the album really well as it feels like it can also conclude a concert too with well placed guitar riffs.

I don’t have any negative things to say about this album except that it would have been amazing if it had been on an album. It is a very good album, but not great. It’s very good and solid as every song legitimately has a different vibe. There isn’t much of a flow, and it does sound like each song was with a different producer. It needed something to get it over the top, but it really is an enjoyable album.

As of 2019, it’s really cool that they’ve lasted this long. Many groups have gone through turmoil, struggles, hardships, success, and more. Nu’est has endured the test of time and have also thrived. They’ve evolved as many groups start to get older.