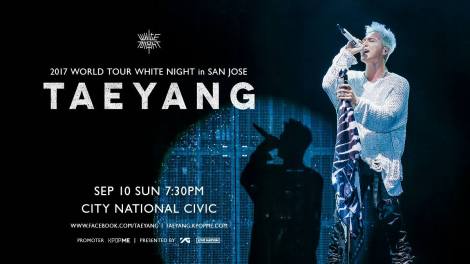 On September 10th, 2017, Taeyang of Big Bang made a pitstop in San Jose, CA as a part of his “White Night” tour that also spanned various other cities in the U.S. and Canada, South Korea, Japan, and Southeast Asia. At this stop in his world tour, his destination was at the City National Civic. It was the first time in four years he has performed a solo concert in the Bay Area and his first time doing a concert in San Jose. This world tour is on the heels of the release of his most recent album, “White Night”.

Nothing is more special than being able to share the limelight with his bandmates, but in this case, he can show that he can carry a world tour on his back. Sure, he is a member of one of the biggest boy bands in the world, but he also is an individual too. In this tour to support his most personal album to date, he also wanted to express himself during these concerts to all the VIPs in attendance.

The wonderful part about being able to attend the North American leg of the tour is smaller venues which means the audience is a lot closer to him as opposed to some of the arenas and stadiums he did in Asia.

What made this event more special than ever was that he has a much deeper discography than ever before between his solo material, songs with Big Bang, and even his one song with G-Dragon. For sure, he would not run out of songs to perform as he also had his new songs to perform for American audiences for the first time.

Despite having to know Korean and Japanese as they are his two biggest markets, he was dedicated in being able to communicate to the American VIPs without a translator nor a teleprompter. He was determined to speak in our native language which made it a lot more intimate.

He pretty much performed all of his songs from his catalog and went into the Big Bang songs to keep the concert going. He obviously only performed his part during the Big Bang tracks and only did a small handful.

It was a blast attending this concert because all the songs were familiar. Unlike a lot of groups where I have to learn what songs they have on the spot, I already had a good idea on what he was going to perform.  My only wish was for him to be able to perform some of the Japanese songs since only those that attend the Japanese concerts get to hear them.  Everyone else gets the Korean sets.  It was a special yet bittersweet moment because there is an impending mandatory military service required for all South Korean males which means it may be a long time until we get a Taeyang concert or a Big Bang concert on American soil.