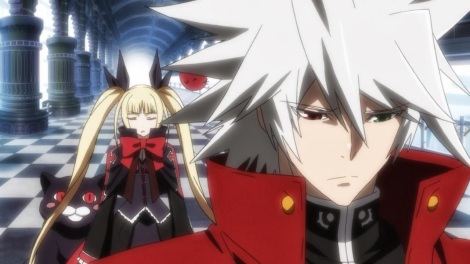 After playing some of the video games from this franchise, I kind of figured that I should give the anime a try. Since the games are classified under the anime sub-genre of fighting games, I believed the actual anime should be good. Of the numerous fighting games I’m a fan of, this franchise was one of the few where I wasn’t too familiar with the storyline.

Ragna the Bloodedge is a renegade who is a wanted person with a gigantic bounty on his head for reasons unknown. He also has a powerful weapon that could change the tide in a major conflict which makes him a person of interest. With his huge bounty, it draws many key figures towards him with some trying to take his side while others trying to collect.

This series is definitely full of action and excitement. There were tons of fight scenes which were enjoyable.

There were a lot of plot holes. There were officially 12 episodes, but by the end of it all, you don’t feel complete. You feel like there should be another episode after the 12th one or another season, but there just isn’t. A lot of things go unanswered by the conclusion of the last episode. You never truly have any closure through a very confusing story.

If you play some kind of obscure character in the video game but didn’t see your character, forget it. Not every character that’s from the game made it into the anime.

There weren’t too many memorable moments, and I could see why not too many people actually talk about this particular anime series.

Had it not been for a video game, I would not have liked it as much nor would I have tried watching it. I would only recommend it only if you like the BlazBlue franchise that much. I’ve seen quite a few animes based from video games, and this one is among the bottom. If you’re not too familiar with the series, I advise for you to stay away.  The nostalgia isn’t worth it.