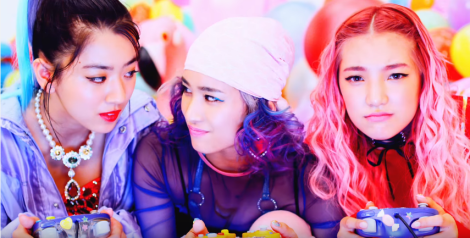 This E-Girls sub-unit comprising of Anna Suda, Yurino Suzuki, and Yuzuna Takebe form SudannaYuzuYully which pretty has a different image and a musical direction than what we’re accustomed to which is leaning towards a hip-hop and dance feel. The vocals will be heavily relied on Yuzuna while Anna and Yurino will be placing their vocals in the form of raps. It’s something I actually looked forward to since these three can always be seen hanging out together even during off time from schedules.

I knew since Yuzuna had the most experience on the vocals, so she had the most responsibilities to carry the song. I think she did a great job doing most of the verses and choruses on her own without Karen nor Reina.

Yurino and Anna played important parts as complementary pieces. The good thing about their raps is that their voices are each very distinctive and stand out from each other.

Although “Call Me Now” was the titled track, the track that I really liked was #SYYB because it’s where Yuzuna shined the most.

I also knew that Yurino and Anna had the least amount of experiences on the mic, so I didn’t expect too much from them. Their performances on the song were just decent and expected. The songs themselves were pretty good but not great.

This album was pretty good, but by no means is it as good as any of the E-Girls projects. It does have replay value, but more like every now and then, not as often as possible. I do appreciate that it’s a different direction they were heading in and trying new concepts especially Anna and Yurino stepping it up. I feel like those two if given the opportunity, would shine more the next time around.