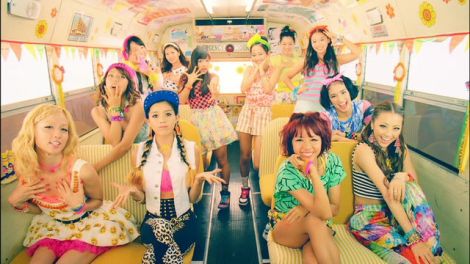 “Colorful Pop” is the second full length studio album from E-Girls after releasing the successful “Lesson 1”. They had already released several single albums which contain some of the songs along with five additional songs. I already loved the previous album release and was looking towards how good this album could possibly be.

What sets this album from “Lesson 1” is the inclusion of more of a disco dance pop sound. I also love the diversity of the sounds with different singers getting a chance to shine on various tracks. All the singers may not get a chance to sing on a particular song, but on some songs, the spotlight belongs to a small handful of them.

The songs that really stood out besides the singles were songs like “ASAP”, “Fancy Baby”, “Koi no Boogie Woogie Train”, and “I Heard a Rumor ~ Uwasa Wassap” with their fun disco/funk sounds mixed with dance. These are the songs that help define the album.

What I really stood out were some of the slow songs like “Mirai e”, “Sayonara”, and “Yakusoku no Basho” really showed off the singing abilities of Shizuka, Reina, Ami, and more.

I didn’t think another version of “Follow Me” was necessary. I thought it could have done without with as this album should be treated as its own new one as opposed to needing a previous hit to add onto this one.

It’s the same singers who get the chance to sing once again. Ami, Reina, Yuzuna, Erie, Aya, Shizuka, Karen, Kyoka, Ruri, Chiharu, and Mayu are the only ones that get to sing while everyone else is part of the performance.

This is actually one of my favorite albums overall as it’s one that can be listened to from top to bottom with many rotating singers. The album is loaded with singles and backed up with quality B-sides which helps diversify the track quality. All of the singles are spread out pretty evenly and are not stacked in the beginning. “Kurukuru” also happens to be one of my favorite songs in the JPop genre period.