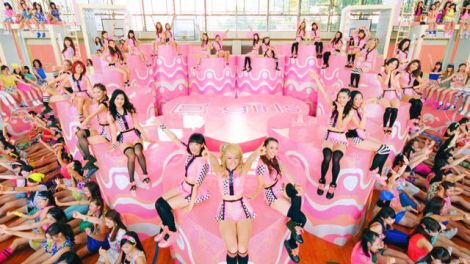 With E-Girls being one of my favorite groups in all of music, not just JPop, I really wanted to check out their third studio album titled “E.G. Time” which meant it was E-Girls’ time to shine. This album means a lot since my favorite song from them, “Highschool Love”, is included in this LP. There are also a few other songs that I’m a fan of which made this album worth checking out.

This album isn’t as littered with singles like the previous two albums, but there are some really good b-sides. The singles in this album include “E.G. Anthem – We Are Venus”, “Mr. Snowman”, “Highschool Love”, and “Odoru Ponpokorin”. Some of the songs that definitely fly under the radar include “Rock’n Roll Widow”, “Music Flyer”, and “Chocolat”.

This album is different from “Lesson 1” and “Colorful Pop” due to a change in music styles which is a welcomed change. This time, they incorporated new sounds such as electronic, rock, holiday, and even a touch of KPop which helped diversify their sound.

With a mega group like E-Girls, departures are bound to happen. Some can buckle and fold, but in this case, it gave chances to other members to step up like Yuzuna who started to carry more of the load when it came to providing vocals.

I didn’t think that they needed another version of their hit single “Follow Me” as a track on the third consecutive album. It should have been left on “Lesson 1”. The other song that came from a previous album onto this one was the “Colorful Pop” single, “Gomennasai no Kissing You” which was not needed since this album had plenty of singles and b-sides that could fill out this album.

I wouldn’t say that it’s a weaker album by any means. It definitely is different which is good since it keeps things fresh. You get a mix of new E-Girls sounds that you could definitely get behind with classic E-Girls hits that you know and love. Four singles is still a lot for an LP. Most artists just have one or two singles for a studio album. This album is filled with hits with diverse voices on each track.